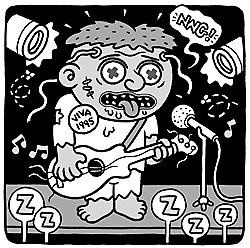 For almost 10 years now, Ive been waging a war against retrospective term extension. My simple argument has been that copyright is about creative incentives, and you cant create incentives retrospectively.

I now see I am apparently wrong.

As reported yesterday, there was an ad in the FT listing 4,000 musicians who supported retrospective term extension. If you read the list, youll see that at least some of these artists are apparently dead (e.g. Lonnie Donegan, died 4th November 2002; Freddie Garrity, died 20th May 2006). I take it the ability of these dead authors to sign a petition asking for their copyright terms to be extended can only mean that even after death, term extension continues to inspire.

Im not yet sure how. But I guess I should be a good sport about it, and just confess I was wrong. For if artists can sign petitions after theyve died, then why cant they produce new recordings fifty year ago?